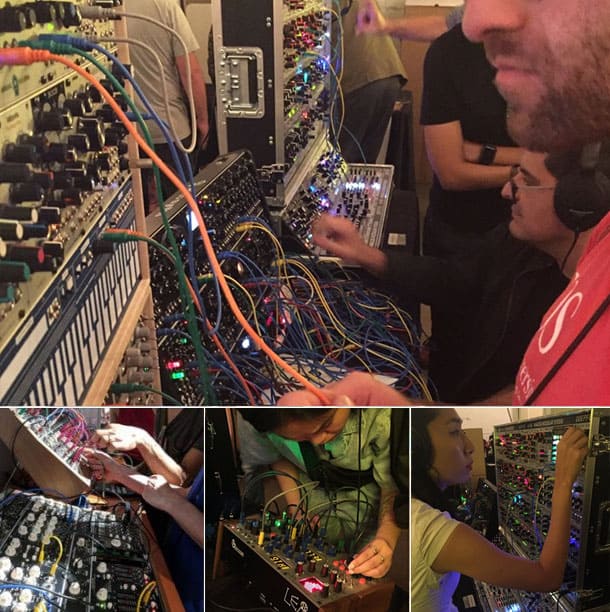 [Portland event] “From our perspective, the show was smooth and stress-free! The turnout was incredible and hat’s off to you and your publicity. I know there were people who decided not to wait in line and so they didn’t end up coming in. A bigger venue would have reduced that line, but I don’t think that wouldn’t have changed the numbers at our table. The fact that headphone use only was the policy made for an unexpectedly enjoyable time. […] There were plenty of people checking out our products and we did give out many business cards, stickers and fliers. It was non-stop, in fact. Telling attendees to bring their guitars and headphones was brilliant. Also having those Harmony guitars available was fantastic.” – Paul Barker, Malekko Heavy Industry [LA event] “Overall the show was great. You had a great turnout of quality guests and I really enjoyed my time talking with everyone. The show did get pretty crowded […] I talked Eurorack a ton with people who knew who I was, what we do, and how modular works. Bravo on that front as well! I think what you are doing is great. You got a ton of interested people in the door and I made quite a few sales which is awesome.” – Alex, WMD

“Our visit in Montreal was a great success. MOOG is now selling our modules in Canada and we had very positive reactions at the show.” – Joerg, Radikal

[LA event] “Very satisfied, it was a really good turnout, especially on Saturday, I did not bring any products but had a number of requests to buy them.” – Andrew, SSF [Portland event] “[It] was a great event. I thought things went well all around. It would have been nice to have a bigger space and some drinks!” – Jeannot, 4ms [Portland event] “I was super happy with the way the event turned out! I think for Eurorack in general, just having that many people in the building at once helps as all of our brands are very niche and only really applicable to a certain segment of the crowd at any given time. Everything else seemed to happen without a hitch -we were able to route and share power no problem and though it was a little odd at first, the bar top worked pretty well as a display table!” – Ryan, Acid Rain Technology [LA event] “The quality and quantity of the attendees were good. We were pleasantly surprised by the number of people who already knew about us and our gear. After that, most people who approached us knew something about synthesizers and were prospective customers.” – Aaron, 1010 Music [Brooklyn event] “I was happy with the overall experience and would do it again. I had a good amount of people expressing interest and playing with the gear. Overall the event was great but with minor tweaks I think it could be much better.” – Eli, Mystic Circuits [Brooklyn event] “Very happy [with the experience], VERY intense [traffic]” – Fabio,  Vinicius Elektric [Montreal event] “For this first Sonic Circuits MUTEK event there was a great turnout, was organized well, and the venue was awesome. It’s really great you make the event free, and it was cool you included the Modular Mondays guys and had them perform.” – Keven, Zlob Modular [LA event] “We were extremely happy with everything and want to help make it even bigger next year. Great turnout btw! Customers were friendly. Nothing was stolen from our booth. The people who came were focused- i.e. most of them knew what they were looking at, not like a bunch of random NAMM people asking dumb questions.” – Shawn, Analogue Haven [LA event] “The event was very successful, lots of foot traffic the whole way through. Everyone was really enthusiastic about the products and learning about eurorack synths. It was nice to meet people who were interested in exploring a new type of instrument.” – Alexandra, LA Circuits [Montreal event] “Participating in the Montreal Synth Expo was a great experience for Radikal Technologies. The event was expertly organized and prepared in loving detail. Great choice of location. Loads of friendly visitors actually interested in new Synths and Euroracks! We definitely enjoyed our time meeting new people and making new fans. Even among the exhibitors you could feel a strong sense of community.  Two enthusiastic thumbs up! See you there next year.” – Jurgen, Radikal [Portland event] “Overall, I was pleased with the event. […]I thought the traffic was pretty steady all day and the people who attended were enthusiastic. Once the doors opened, I didn’t leave my table all day. Being on the stage could have been bad except attendees had to walk past unto get to Roland…so it worked out well for us!” – Steve, 1010 Music [LA event] “I was very satisfied with the location and vibe.  I thought there could have been more press to cover the event. There was a solid amount of people.” – Henry, Strange Electronic [Montreal event] “Everything went super well for me (and for ModularMondays). Plenty of people in attendance but it never felt cramped or crowded. All of our technical requirements were taken care of and we lacked for nothing at all. Congrats to you for this first in Montréal and I hope to see you again next year!” – Ismail, Modular Mondays [Portland event] “The Portland event was great and I had lots of fun. […] As for the turnout, it was impressive but it seemed like the guitar section was a bit more consistently busy than the Eurorack section… again, to be expected. – Alex, WMD [Portland event] “I had a very good time. Traffic was well regulated and was always comfortable. A good amount of attendees in total. Overall your events have been very well organized – better than most!” – Andrew, SSF [Toronto event] “I was pleased with the event. It seemed to run smoothly overall. I had a good number of visitors to my table, and they were interested in my products. I passed out just over 100 of my advertising stickers, which seems like a good fraction of the total attendance. The visitors covered a wide range from those who’d never seen a modular synthesizer before at all, up to current Eurorack hobbyists who already had some familiarity with my product line. The headphones-only rule was wise.” – Matthew, North Coast Synthesis