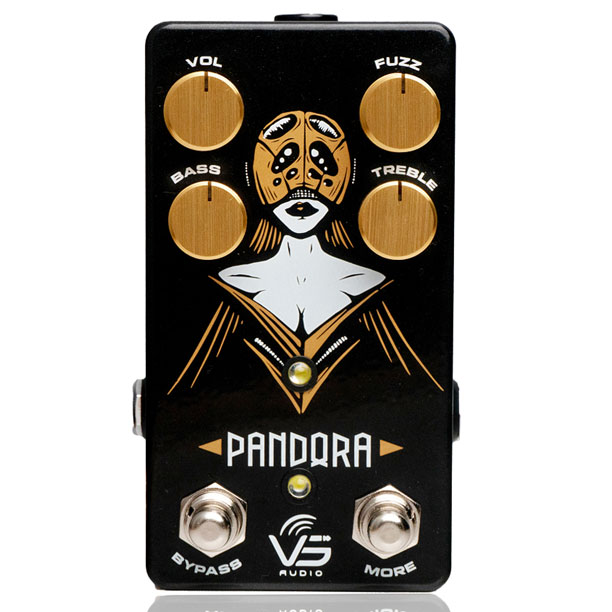 The Arbiter Fuzz Face is one of the most cloned and referenced fuzz circuits (no wonder we have an article about all the pedals it inspired). Pandora is the name of the first woman in Greek mythology, who dared to open a forbidden box that contained all the evils of humanity. Hailing from Athens, the VS Audio Pandora is a fuzz box that’s not as evil-sounding as one may expect – inspired by the Fuzz Face.

This is a highly modified, dual gain, analog circuit featuring a hand-selected NOS AC125 Germanium Transistor that allows for a much broader sonic palette than the original, while maintaining its vintage tone and fixing issues that plagued vintage units, like input impedance-related incompatibility with other pedals.

The active Bass and Treble knobs can sculpt the tone subtly or radically with their +/- 20dB of boost, and the separate More footswitch can take things one notch further by adding a separate clean boost circuit that can push extra volume into the fuzz or also to your clean signal when the fuzz is turned off.

Have a listen to the sound of the VS Audio Pandora, in the videos below. We added it to our article about the best Fuzz Face clones and evolutions.

This fuzz box is based on the iconic “Arbiter Fuzz Face” circuit but evolved to something much more than that.

The PANDORA features a highly modified circuit that allows for a huge variety of sounds perfect for any guitarist or bass player. Its BASS and TREBLE active tone controls with up to 20dB each go from thin and dark to full and bright. At low fuzz settings the Pandora is delivering highly defined OD tones that can push any amp without generating excessive dirt. With the FUZZ knob dialed up, the sound is transformed and the pedal delivers thick and meaty sustain that sounds huge in front of a slightly cranked tube amp.

This dual gain stage fuzz also seeks to fix the input impedance issue that guitarists who come seeking the rich sound and character that Germanium devices can deliver. A unique buffer network has been built into the front end so the Fuzz circuit is like being driven directly straight from a guitar, but can be put in line with any number of effects with no issues.

As on most good germanium fuzzes, reducing guitar volume transforms fuzz into glassy cleans. The Pandora is exemplary in this respect, delivering bright and highly defined clean tones that along with the MORE transparent boost cuts right in the mix and covers all the musical needs.