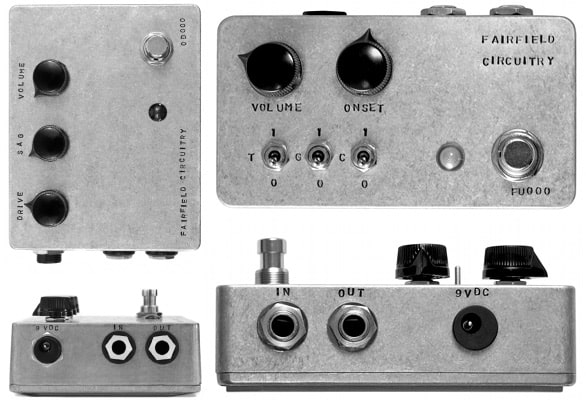 Fairfield Circuitry is a tiny oddball, boutique audio effects company from Canada. I note the canadian heritage in that the physical aesthetic choices as well as the functions of the effects are reminiscent of a backwoods experiment by bearded men with too much time and whiskey on their hands. Fairfield stompboxes come with no fancy graphics. They are housed in utilitarian chassis with a minimalist font that emphasises the power that these pedals have. The knobs and switches feel solid and well thought out as if to give confidence that these pedals can take a heavy band practice with musician stomping abound. I was given two pedals to review The Unpleasant Surprise and The Barbershop.

The Barbershop is a simple and playable overdrive pedal with guitar amps in mind. With only three controls, The Barbershop is quick to set, and pairs well with driving an amp hard and playing into the distortion with dynamics. This pedal is made for guitarists who want to quickly grit up their sound without an array of options that have little to do with simply playing the guitar. I could see fans of Lucero or The Replacements gravitating towards the tones possible with The Barbershop.

The controls on the Barbershop consist of drive, sag, and volume. The drive increases input gain, while the volume controls output gain as one would imagine from a pedal like this. The sag control reduces the voltage to the amplifier as it is turned counter clockwise. I found that this had significant impact upon the attack of the guitar when sag was set to the full counter clockwise position. It also affected the eq curve of the distortion in a subtle manner somewhat similar to pushing an amp harder. It is this sag control that puts The Barbershop into a unique category of pedal that can create a guitar tone that is specific to the user.

In my experimentation with the pedal, I was always pleased with the tones that I could get with guitars, but what excited me more about the pedal was using it on other sources. I play bass in a band with a similar aesthetic direction to an amped up Neil Young. The Barbershop on bass was the perfect thing for this project. The notes rang out properly but with just enough grit that it cut through the other guitars without bulldozing over the arrangement. I also used a clean gain boost before The Barbershop to push the distortion on choruses a little bit. The pedal held together with a similar sonic footprint while pushed which sounded natural in the circumstance.

The Unpleasant Surprise is like the druggie stepbrother to the functional and dependable Barbershop. This box is marketed as a fuzz pedal but with so many strange possibilities that I wouldn’t put it in parallel with classic fuzz pedals such as the big muff or a fuzz face. It is possible to create wild growling fuzz distortions with gated dynamic reactions with The Unpleasant Surprise. As the name suggests, this is not a subtle or pretty pedal. My first reactions conjured up memories of Nine Inch Nails or How To Bury Strangers. There are only two knobs on The Unpleasant Surprise, but in conjunction with three switches the possibilities of setting become large.

The knobs are output, volume and onset. Onset controls the threshold of the gating function and the gain of the fuzz. As the onset is pushed clockwise, the fuzz element of the pedal becomes more apparent. In this position the fuzz becomes sustained and playable in a traditional manner. As the onset is pulled counterclockwise, spitting gate artifacts mix into the signal.

The switches include treble cut, amplifier bias, and compression. The treble cut allows for a more useful fuzz sound at higher gain settings. It also pairs well with the compressor engaged. The compressor pinches the high end in a way that might cut through the mix in certain situations, but could also come off as overbearing in a sparse arrangement. The threshold of the compressor is controlled by the onset knob, which in practice acts more like a gain boost than anything else. If you have a wild sound going on without the compressor, engaging compression might make your sound just a little crazier.

The amplifier bias toggles between “open” and “saturated”. I found this to be the least useful control on the pedal, but only because it was less extreme. The saturated setting often aided in the wild and crazy settings and the open setting allowed for more of a functional fuzz. I often grabbed this pedal for noisy layered overdubs as opposed to a primary distortion for an overdub.

For the purpose of a crazy distortion this pedal does great things. I had a great time putting it after a reverb return in a mix for a mangled reverb distortion. In a practical band setting I could see this pedal working best when used with a blend pedal to temper the chaotic and dissonant characteristics. –  Shane O’Connor is a producer, mixer, and engineer located in Brooklyn. He has worked with Tab The Band, Talib Kweli, Xylofaux and Madi Diaz.