You may think that Bondi Effects is another Italian manufacturer (we covered a bunch of them as of late), but the name actually originates from an Australian aboriginal word meaning “the sound of waves crashing over rocks.” Is that natural sound the precursor of fuzz?

Founded in 2013 and run by husband and wife Jon and Anna Ashley, the company’s raison d’être can be traced in the desire of the six string playing couple to “create the pedals we wish existed for our own rigs.”

Apparently their stompbox wishes were shared by many other electric guitarists, since the company has generated a noteworthy buzz in a few years (their second pedal,the Del Mar Overdrive, is sold out as we speak…)

The couple is not in a hurry to release new effects, having just three under their belt, but the strategy has proven right, because each pedal has been met with great interest. 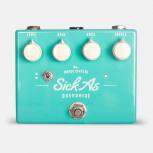 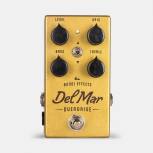 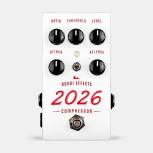 Their latest release is a Blackmer® VCA powered compressor – the first non overdrive pedal of the line – called 2026. Here’s how the designer expresses what he wanted to accomplish with this stompbox:

“I often found the compressors I liked had to sacrifice something for the sake of preserving my tone. OTA style compressors (like the Ross) cut the highs too much for my liking, and many tried to solve this problem with a clean-blend knob; but to my mind, this just negated the point of using a compressor pedal to begin with. Optical compressors had a more transparent tone because of their slow attack and release rates, but were not ideal for more overt compression.”

The 2026 is Bondi’s answer to those compromises: “a completely transparent compressor. It does not filter or effect your tone in any way other than compressing it.”

To allow a degree of flexibility, it features two modes: “Blue” is a “Dynamic” mode, where attack and release, just like in an optical compressor, are set automatically through the player’s dynamics. “Red,” instead, is a fully manual mode.

Check out the brand new demo by Brett Kingman, below, and, underneath, a A/B video of the company’s two overdrive pedals.