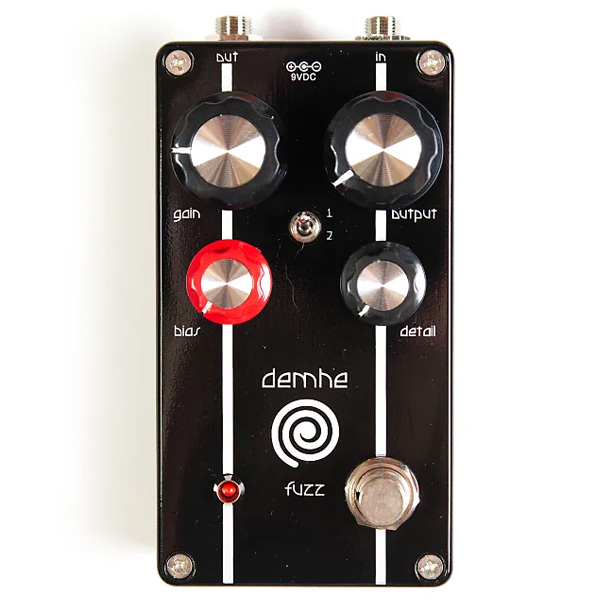 The Demhe Fuzz is the first pedal by Spiral Electric FX hosted in a compact case, and it’s a streamlined version of its big sibling the Demhe Shadow, a custom revision of the company’s Black Rose Fuzz, intended for high(er) gain amps.

An extremely flexible silicon fuzz with dual voicing that can also produce overdriven tones, the Demhe features a Detail knob to control the high frequencies and a Bias one that interacts with the Gain to conjure up the fuzz’s character. The Output knob offers a lot of extra dBs, allowing players to push their amps for extra saturation.

The 1/2 toggle switch gives you the option of diode clipping and its softer overtones (position 1), or no diode clipping which delivers the unaltered sound of the unit’s silicon transistors, which is louder and more in-your-face.

A city crouches upon Lake Demhe’s shore, maybe it is Carcosa? Maybe it is Alar? Maybe it doesn’t matter? Once you have peered into Demhe’s cloudy depths, what lies upon the shore ceases to be a concern.

The Demhe Fuzz features chunky depths and scintillating highs that can be tamed by the Detail Control. Both Gain and Bias work together to create fuzz tones that can range from seductive purring overdrive to savage roaring fuzz. The Output control delivers enough boost to punish any amp channel. The two-way toggle selects between silicon diodes, or the “blower” setting for the pure unaltered sound of the Demhe’s silicon transistors.

The Demhe’s heralds a new “smol” form factor from Spiral, and with top jacks the size is very pedalboard friendly. Dressed like a preacher in pin-stripes and bible-black, the look is pure class. The Demhe It also features a “smol” price of $149.95.

Reverb.com and Spiral Electric FX have teamed up to offer this take on a once lost ’70’s fuzz circuit. Available exclusively on Reverb

Spiral Electric FX was started in 2018 by Tom Cram formerly of DOD/DigiTech. Tom Cram is the mastermind behind many effects including the now classic Carcosa fuzz amongst many other highly revered effects.

NOTE: Spiral Electric FX pedals do not have a battery option. Batteries are bad for the environment and there are a ton of excellent power supplies on the market.