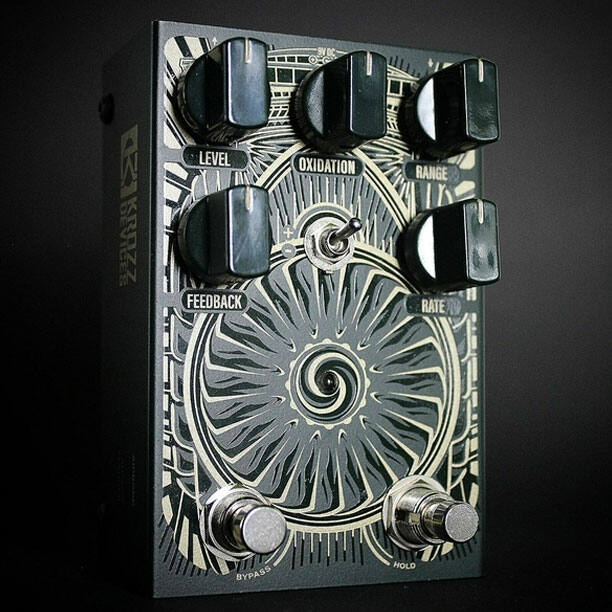 The Krozz Airborn Analog Flanger comes out of Brazil from a company that prides itself on using the best component available on the market – in this case, Panasonic/Matsushita MN3207 NOS chips.

This pedal’s value is mostly in its sound, but it also features some unusual controls, besides the expected Level, Range, Rate and Feedback knobs.

Oxidation is a high-frequency filter that acts only on the modulated signal and interacts with the effect’s Feedback, conjuring up a more subtle kind of flanging when the knob is turned down.

The “+/-” toggle selects the feedback’s direction, wether positive (+) or negative (-).

On top of that, there’s a Filter-Flanger switch inside the pedal that lets you lock the oscillator so that the Range knob will select a static frequency range for the flanging.

Airborn is a ­flanger that will take you on a psychedelic journey on a fully analog circuit.

Through a BBD (Bucket-Brigade Device), our pedal allows you to recreate iconic ­flanger tones that marked the history of music, ranging from the “acid” and “liquid” sounds of Gilmour to the famous “jet plane” sounds of EVH , also enabling eccentric timbres when in negative feedback mode.

WHAT IS A FLANGER?

The flanger effect occurs when an audio signal is duplicated and one is slightly delayed in relation to the other, with a variable delay time. The sum of the unaltered signal with the delayed signal results in a “comb filter”, that is, the peaks and valleys resulting from the sum cause some frequencies to be amplified, while others are attenuated, in a harmonic series. By varying the delay time (by means of an oscillator), the frequency spectrum where the filter acts also varies, causing the sensation of movement in the sound that is characteristic of flangers.

In the flanger circuit, the output signal of the effect is reintroduced into its input – what we call “feedback” – further highlighting the intensity of the amplifications and attenuations of frequencies arising from the modulation. Feedback has polarity, and it can be positive or negative, so that in positive (or additive) feedback, the clean signal and the modulated signal are in phase – they are added together – and this is where most of the famous guitar tones are found. In negative (or subtractive) feedback, the modulated signal undergoes a phase inversion and is subtracted from the clean signal, generating a hollow sound characteristic, which resembles that of a “talk box”. Aiborn makes it possible to choose between positive or negative feedback through the “+/-“ selector switch.

• Level: Controls the effect volume. In addition to avoiding the volume loss characteristic of this circuit topology, Airborn’s volume control can even go above unity gain and boost your signal.

• Range: Selects the extension of the frequency band through which the modulation will travel. At lower settings you will have a smaller range and more traditional tones. Clockwise the sweep is larger and the effect becomes deeper.

• Rate: Determines how fast the frequency range will be swept (set by the “Range” control). Clockwise the oscilation will be faster, counter-clockwise it will be slower and more “jet-plane-like”.

• Feedback: Controls the amount of feedback of the effect. The higher the knob, the more intense the effect will be, tending to self-oscillate when close to maximum.

• Oxidation: It is a frequency filter that acts only on the modulated signal and interacts with the “Feedback”. With the knob open, the sound is more strident, characteristic of conventional flangers, while counter-clockwise the high frequencies of the modulated signal are cut and the effect becomes more subtle.

• Filter-Flanger: Inside the pedal there is a small switch that locks (left) and unlocks (right) the oscillator. With the oscillator locked, the filter becomes static and the frequency range where it will act is selected by the position of the “Range” knob.