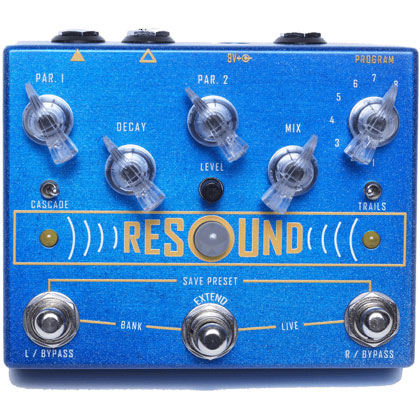 Cusack Music unveiled their new stereo reverb Resound at Summer NAMM 2018, and it looks like a serious contender in the not-so-small niche of multi-function digital reverbs.

Sporting eight modes, the Resound includes all the features you expect from a modern reverb, including presets (you can save up to eight), Trails switch, Expression in  and two mode-dependent controls (Par 1 and Par 2), plus the standard Level, Decay and Mix knobs.

On top of that, the  and an “Extend” switch, used in conjunction with the “Cascade” toggle – which “controls whether new notes are added to the extended reverb or not” – can transform this box in a creative device by allowing create complex ambient landscapes.

We were a little confused by the double “Bypass” footswitch so we reached out to Mark at Cusack, here’s his reply:

“Instead of having just one bypass footswitch, the Resound has two: there is a center four color LED which indicates the bank you are on (banks are changed by pressing the two left footswitches at once) and in each bank there are two presets saved, Left and Right.

So basically they are both on/off bypass for the pedal as well, instead of the usual pedal that has one on/off footswitch.

One advantage of this is that if you have two presets that are from the same program saved on both presets in a bank, you don’t lose any trails when you change from one to the other, so transitions between two settings are seamless.

Another advantage is that you can make quick reverb changes -by having them in the same bank you can just hit left or right and instantly change your reverb program.”

Check out the video demo by Mike Hermans.

Description:
The Cusack Music Resound is a digital reverb pedal based around the popular Spin Semiconductor FV-1 micro. It comes loaded with eight different reverbs, the ability to save up to eight presets, and an “Extend” switch to help create complex ambient landscapes.

Features:
-Separate Live and Preset modes.
-Parameter 1: Varies by program (see manual).
-Parameter 2: Varies by program (see manual).
-Decay: Controls how long the reverb effect lasts.
-Level: Boosts or cuts the overall output signal from the pedal. Noon is unity gain.
-Mix: Controls the dry/wet mix. Fully CCW is 100% dry; noon is 50/50 dry/wet; fully CW is 100% wet.
-Program: Switches between the eight different reverb programs. Program names are located on the front of the pedal. The manual contains more detailed descriptions of the programs, including the functions of Parameters 1 and 2.
-Cascade (used in combination with Extend): Controls whether new notes are added to the extended reverb or not. Left is off; right is on.
-Trails: Controls whether the reverb effect completes or not when the pedal is bypassed. Left is off; right is on.
-L / Bypass: Engages/disengages the pedal (live mode), or engages/disengages the left preset (preset mode).
-R / Bypass: Engages/disengages the pedal (live mode), or engages/disengages the right preset (preset mode).
-Extend: This switch maxes out the decay, which varies by program (see manual). Press once to turn on (large LED blinks fast), and once more to turn off.
-Stereo Out / Expression In: This is the right output jack marked by the empty triangle. It can be used as a stereo output, or an expression pedal input. The functionality is controlled by internal jumpers.